Betta Have My Money 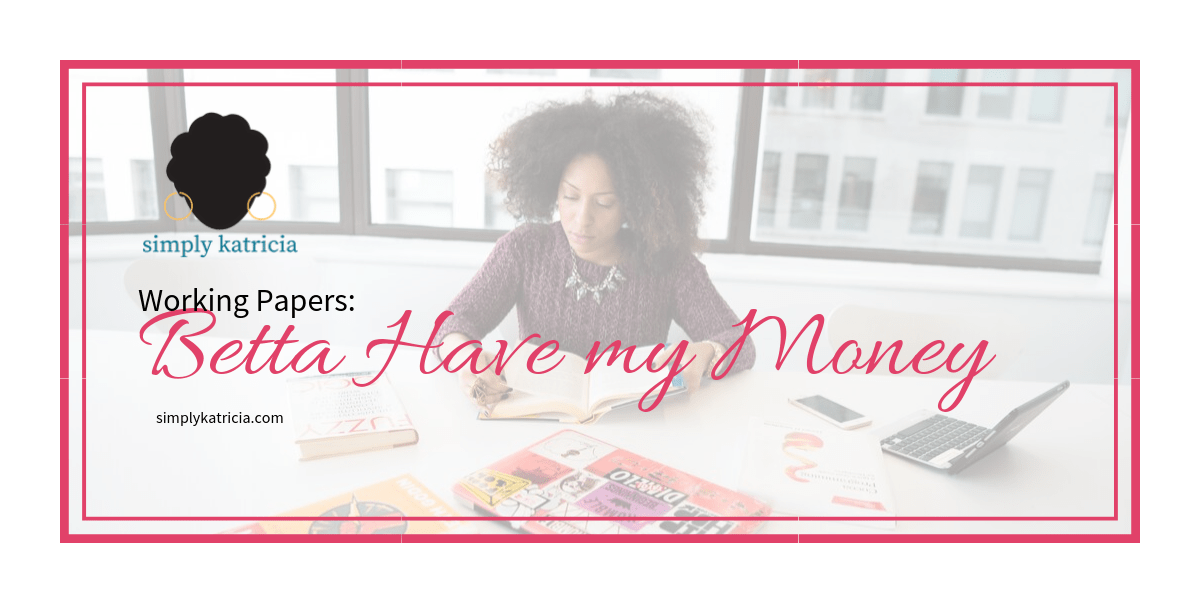 In the summer of 1994, it was the year of independence, for me at least.  No, I wasn’t a rich ‘Home Alone’ star becoming emancipated from my parents. I was a young lady with working papers!

Working Papers:  In New York State, anyone under 18 years old must show an employment certificate before they may be eligible to work in a business.

With working papers as a young teen, there was nothing more exciting to look forward to than making my own money. The Summer Youth Employment Program (SYEP) offered minimum wages and work experience for the eight weeks of the summer break. Looking back, those checks were a blur. What did I even buy? Budgeting was not a worry at the time and neither was wondering if the other teens were making more or less than I.

Pay equality was a thought far from a teenage mind in those days. As we blossomed into adulthood, we see that the workforce pay is not as simple as the summers in the SYEP.   A chronological list of your experience, school achievements, skills, and memberships, determine your worth in a business. Let’s not dwell on if your resume is even selected because of biases that recruiters will never admit. I wrote an entire thesis describing hiring biases, but we will come back to that on another day.

When Mo’Nique, Queen of Comedy in 2001, Oscar winner in 2010, asked that we support the boycott of Netflix because of low pay, I sat back and listened to her reasons. I read comments, tweets, blog posts, and conversed with others about it all. And then Tracee Ellis Ross claimed that she too, Golden Globe winner, Emmy award-nominated actress, is not being paid what she feels she is worth in comparison to a male counterpart who happens to also be an Executive Producer, on an award-winning comedy show, Black-ish. I again listened, read, and formed an opinion about what was going on.

After a conversation with a mentor, I realized the game of politics plays a huge role in your status, pay and continued contribution to your overall professional goals. If no one knows who you are past your name, why should they invest all of their chips into your basket?

For every day we step into our professional setting, we have to reintroduce ourselves to the power players that can make the difference in our careers – even if you work for yourself. You are your biggest cheerleader, but if no one is aware you are running in the competition, how can they cheer for you too? There should be no reason why Mo’Nique is not a household name or Tracee to receive compensation for her widely known achievements. Why are these women boxed into limitations towards their exposure and compensated appropriately for their accomplishments?

Here are a few ideas that you can use to stand out in your industry, place of business?

Who are you and what do you want people to know of you when you walk into a room? Social influencers are expected to show their brands on sites such as Instagram, Facebook or a personal blog.  Those in the business atmosphere, the everyday employee, can create a presence on LinkedIn.

Birds of a feather, flock together.  This line commonly referenced amongst friends can also be used in business.  Talk with like-minded individuals that can assist you with moving forward within your business or career.

Along with mentors, build connections with other people that share the same ideas as you. Build bridges and team-build towards a wider audience. Co-workers should work together instead of alone in order to show management, leadership skills.

We often judge Hollywood for revisiting old shows with a younger generation of actors, however, we visit the movie theater or sit on our couch and watch episode after episode.  This concept is everywhere, taking an already successful idea, putting your spin on it and marketing it as your own.  Even in business, does your company have a newsletter? Create one!

While making a name for yourself either in a professional business setting, in blogging, or creating your own business, strategize your position of what you want your ultimate goal to be.  Make sure that you are consistent about presenting your ideas, finally within time, demand your worth.