A Few Reasons why Traveling with Children is Important 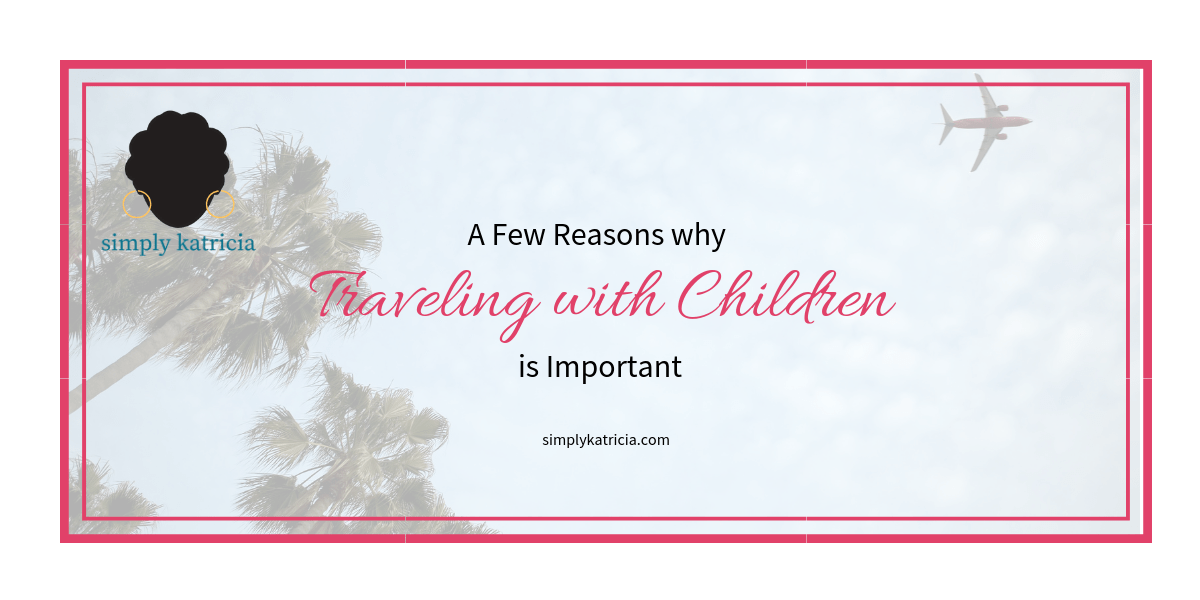 The alarm goes off at 3:30 am, our flight does not depart New York City until 9:30 am.  Why you ask are we up so damn early?   We are traveling with children, well one child, that’s why.  And someone – me, had the bright idea to travel to the airport via public transportation because we’re New Yorkers and we got this.  The only we that had “this”, was the child.  She was up before saying her name a second time – wish school days and any other morning where we need her up early went this easy.  We had to be out of the house by at least 4:15 to catch the 4:30 am ferryboat from Staten Island to Manhattan to the A train to JFK Air Train to eventually end up in Virginia.

And all of this because I don’t drive and he didn’t want to drive alone, while I passenger slept. Also, to give her the exposure to the city in which she lives in.  She was and never will be a car baby/child because we don’t own a car.  Everywhere we travel within New York City is by boat, bus or train, she will be prepared when it’s time for her to move around on her own.  We could have allowed ourselves some more sleep time and spent money by taking a car service but, we wouldn’t have seen the look on her face as we rode on the small boat (the John Noble, is one of the oldest ferries used between Staten Island and Manhattan, and usually operates before the AM rush hours on weekdays), or the questions she had for getting on the Air Train leading us to the John F. Kennedy airport.  It was early in the morning and lord knows I am far from being a morning person, but it was cool seeing this travel experience through her eyes. We made it to the airport as if we were traveling to Dubai – which we were not. We weren’t that early but we had enough time to leisurely walk ALL THE WAY to the end of the airport to our small area to wait for our flight to load.  When traveling domestic, it seems the line just moves and moves and before we knew it, we were cleared and putting our electronics back in their spots in our bags.  I think when security sees children, they sympathize with the parent and are a bit more sensitive and gentle in their tone.  She left her jacket on when in the line and the TSA agent politely asked that she take it off.  They are not always this polite.  Maybe I should travel with children more often, to see the softer side of these agents.

Once we got on the flight, she was slightly disappointed, in my head so was I. Her reason, there were no TVs available, my reason, it was a small ass plane.  Good weather and short flight mean there was no turbulence so I was a happy traveler.  We did have Wi-Fi and snacks, so she was content for the, not even hour flight.  I couldn’t even finish my online book in that amount of time. By the time we landed, she chewed two pieces of my gum to keep her ears popped, ate hers and my cheez-its, and enjoyed her view outside of the window.  Can I get a window seat, don’t want anybody next to me…this plane did not allow us to sit in one row, because of it being small.

WE MADE IT! lol, we safely landed and for the first time, no one clapped. It was weird to me, I’m always on a flight where we clap when we land.  When I looked over, past her father, I saw her big smile of excitement because her vacation had officially started.  Not when we woke up that morning, but now as we were about to leave this small vessel and head to the hotel and in her mind nothing but the pool and room service.  She’s bugging about that room service.

Norfolk is a quiet airport, I think New York so far, is the craziest one I’ve been in.  We didn’t have to pick up our bags because since we’re a carry-on family. lol  So without a car to pick-up, we headed out to meet our Uber driver.  We’ll just skip over that long unnecessary ride to the hotel.  I don’t know how us New Yorker’s that didn’t bother with car service to the airport “got – got”, going to the hotel in Virginia.  This former New Yorker took us site seeing as we asked for that voyage ride in his automobile.  We reported that when we returned to the airport – and realized we had a quicker ride.  Besides the inconvenience of the ride, she was again, site-seeing along with us since she hasn’t been to Virginia a day in her life.  In my mind, we could have gone to Long Island and stayed in a hotel and she would have been mesmerized.  Children don’t need much to have a great time. Arrived at the hotel and she wanted nothing more than to jump into her bathing suit and head straight to the water, beach or pool but her preference was the pool.  She had a plan and wasn’t going to be satisfied until it was done.  After a walk-thru of the hotel, making sure the bed was clear of any foreign creatures, we were off to tour the area and get some food.  She wanted the pool, we the adults who have been up since the previous day, wanted food.  In my mind, we were going to get southern eats but in Virginia Beach that was not the case.  Regular food with a mix of seafood was the option on the beach.  To get some barbecue slathered ribs, it was about 3 miles away from where we were.  Guess that will have to be for another visit.  But she was content with the options, she just wanted her burger or a hotdog.  The hotel bar area had tri-colored nachos and cheese that she thought was the best thing since sliced bread.  Although I would have tried every place that mentioned seafood, we had to be conscious of what she would eat, so we stayed within the confines of a few places.

Traveling with children can be a headache when there is just one and she wants you to play and play and play and all you want to do is relax and lay in the shade and enjoy the scenery.  Children force you to do things you don’t want to do at all.  With her, I had to step further into the Atlantic, more than I would normally do because you guessed it – I don’t swim.  I couldn’t allow my fear of the ocean water to project onto her growing mind.  So with that said, I ditched my phone deep into my bag and headed into the water with her and her father.  She appreciated seeing that with me only being a foot and some inches taller than her, she’d be okay in the water and even encourage me to go in deeper.  Once we managed the waves, we were in for a great time to the start of our vacation.

At the end of our time at Virginia Beach, we took back to New York several fun experiences that if she was not with us, we would not have had.  We’ve done trips without her, we’ve done solo trips and now we are checking off our experience in Virginia Beach as a family.  I’ll just leave this here that, although I enjoy all-inclusive Caribbean getaways, staying within the states with the family isn’t that bad.  Just have to be mindful that every place you go has something for everyone to enjoy.  For us, this is more than what our parents gave to us, so we’re moving in the right direction exposing her to travel and the country in which she was born.

Stay tuned for additional posts, where I will elaborate on the hotel we stayed at, the food we ate, how we got around, and the entertainment we enjoyed while traveling with children.

Do you have reasons why traveling with children is important?