Staten Island: Are You Hungry for Soul Food?

Staten Island, New York is so much more than being known as the forgotten borough, WuTang Clan, or where SNL comedian Pete Davidson lives. Staten Island, has a few highlighted cultures that may not be seen beyond what the news portrays during elections. There is a black history dated back to the early 1800s which is documented in Sandy Ground Historical Info. As an 8th generation direct descendant, Chef Shaw-nae has become a soft spoken fixture of the Staten Island community with her restaurant Shaw-Nae’s House.

This past weekend, the Mr. and I decided to stay on Staten Island and went out to dinner locally since we were moving about during the day taking care of old people aka mom stuff. We settled on trying a place we have come to know of but haven’t tried because of the pandemic, Shaw-nae’s House. Over the years, I’ve come to follow Shaw-nae on Facebook because we have common associates or have common likes both being from Staten Island. Never have we met in person until Saturday night when we entered her “living room” vibe of a restaurant.

As we sat and waited for our order to be taken, the smell of the candles, sound of the rhythm and blues and a Martin marathon was playing on one tv while a game was on the other. If I closed my eyes, I could be in my living room. There were nastalgic items around the space to bring you down memory lane as you lounged on the couch waiting for an available seat. The door opens bringing in a cool breeze as a familiar face joins a table of ladies already eating their delicious looking food. If I could recall, I saw fried chicken, collard greens, cornbread. It looked good. The familiar gentleman may have already called ahead because as on cue, the chef appeared with a vegan meatloaf that looked just as good as a ground beef or turkey loaf. 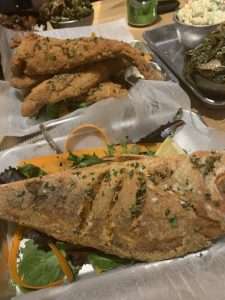 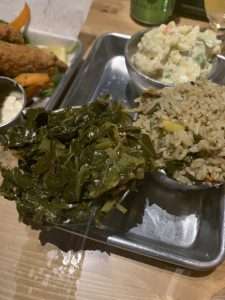 She stops by our table and asked if this was our first time there. Shaw-nae made us feel at home. She gave us a quick run down of the food, drinks and if we needed anything beyond what was on the menu. I ordered a B.A.I.T. (bomb ass ice-tea) because she recommended it. Low key if you name something bomb ass, it better be to more folks than yourself. At some point during the dinner, I ordered another, so it’s bomb.

It’s so difficult making a decision when you go to a restaurant for the first time, but I settled on getting the fried snapper, collard greens, and vegetable rice. Chris ordered the last of the oxtails, a side of greens and potato salad. Black folk usually inspect potato salad before paying for it — someone was being daring and it worked out because it wasn’t bad. I’d personally add a little paprika on top before it leaves the kitchen, but that’s just me. lol Let’s not forget a last minute add to the order for fried whiting. Leftovas with grits then next morning was indeed a delight.

“Shaw-naé’s House is a new, first of its kind, soul food, holistic-infusion boutique”

Laughter from neighboring tables, the door opens and some familiar faces come in and settle in their space in the living room. I made my way to the small restroom to wash my hands even though there was complimentary sanitizer on the table. It was a good one too because my hands weren’t sticky when I used some. While waiting for our order, we nibbled on the complimentary cornbread – Strawberry, Sweet Potato, Vanilla Pound, Oreo, and Lemon.

*Spoiler Alert* I’ll be coming back for an order of one of the flavored cornbread selections and the whitings.

When our food came, I was ready to dive in. “Would you like some hot sauce?”, “Yes!” With my fork in my left hand, I went back and forth from the snapper to the greens and then some of the rice. It was a good combination for a Saturday night meal. I even tasted a bit of the oxtails which were falling off of the bone. I’m sure, when we go back we’ll be a bit more comfortable sucking on them bones, cuz baby that gravy was yummy.

There aren’t many of us who have restaurants that make you feel as if you are in a family relative’s living room eating dinner, especially on Staten Island. I’m glad that we experienced Shaw-nae’s House and look forward to returning since it’s in the neighborhood and we definitely were too full to get dessert. The only thing that could be missing if you must have it with your meal, is a drank. Knowing my folks, that could turn into a different type of living room, so the vibe is good without it!

Unlike other neighborhoods of New York City, Staten Island does not have many black owned restaurants. We have in the same neighborhood, a smoke meats and craft beer spot, a couple of Caribbean restaurants, and a fried fish restaurant. It’s not much but it’s Staten Island. If you ever take the free ferry over or come across the Verrazzano, go visit Shaw-nae’s House, it’ll be worth the travel.

Do you have a women owned restaurant you go to? Tell me about it.